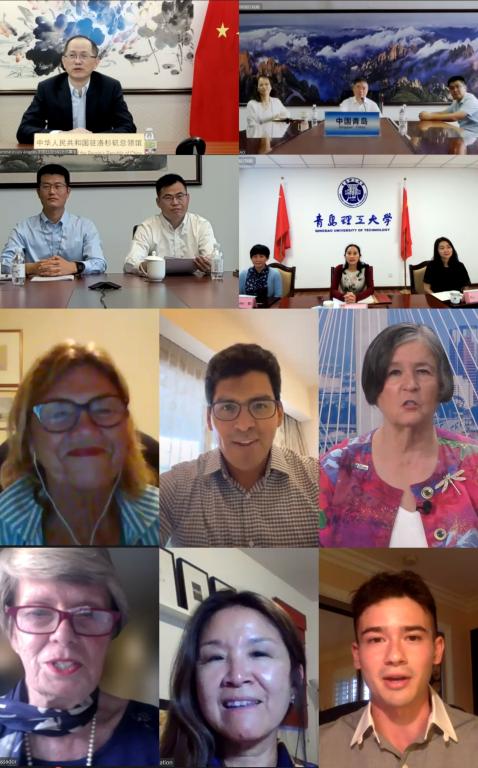 This year's pen pal program was officially started from April and was open to students from Qingdao Universityof Technology and California State University, Long Beach. 28 program participants are matched with a foreign pen pal counterpart that shares similar interest, studies and hobbies. During the course of the three months, students have the opportunity to build a friendship and have deep communication by exchanging video calls, texts, photos and sharing more personal information. They alsosubmittedthe final project via PPT and videos. Atthe award ceremony, LBQA announced the winners of the team group and individual group, 5 students in QUT from School of Humanities and Foreign Languages, School of Mechanical and Automotive Engineering, Business School, School of Marxism won respectively the first, second and third prize both in team and individual award. The Consulate General of the China in L.A., FAO of Qingdao Municipal Government, the LBQA, and the universities on both sides all spoke highly of this program.

The students expressed that the pen pal program helped them fully appreciatethe Chinese and American cultures, improved their understanding of each other's cities and cultures, and gained sincere friendship. They hoped to continue to communicate after the program and continue the valuable friendship across the ocean.

In 2020, the FAO of Qingdao Municipal Governmentand the LBQA initiated the Digital Pen Pal Program, and the Office of International Affairs of our university actively organized students to participate in it. The Digital Pen Pal Program has brought the young people of the two cities closer, set a new example for China-US people-to-people exchanges, especially youth exchanges, and played a positive role in enhancing mutual understanding and friendship between the two countries. The Office of International Affairs will continue to promote the exchange and cooperation with sister cities and sister schools, and continue to facilitate the school for double-first-class construction and improve the level of international education.